Change, my dear. And not a moment too soon

This week I am launching the next spin-off from my existing Tenannt Coat and Tennant Suit blogs.

I have already got a blog dedicated to all things to do with Fifth Doctor Costuming, but now I am regenerating again to create an new blog for all things relating to Sixth Doctor costuming. 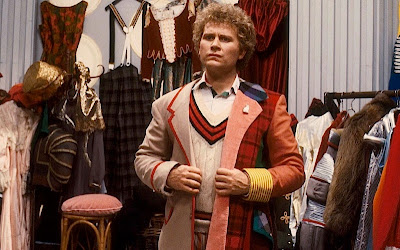 You will find I have already migrated the entries relating to Six Costuming from my original blogs so they are now all in one place.

This will then keep the Tennant Coat and Tennant Suit blogs concentrating on what they were intended for - all things Tennant!

As my repertoire expands I will bring other blogs online to cover those costumes.

Watch this space . . .
Posted by Steven Ricks Tailoring at 21:16 No comments:

No, the title of the posting is not a reference to the classic 20th Anniversary special from 1983, but to collectively the Third, Fifth, Sixth, Seventh and Tenth Doctors!

Well, I have been having a lot of fun recently, slowly expanding the costume pieces I do.
To start with, they all appeared together in the original Tennant Coat or Tennant Suit blogs, but I have since started building separate blogs to cover the costumes of each Doctor, so they are easier to find and digest.

So far I have added a special blog for the Fifth Doctor to cover the Five Trousers and Five Coat I have been working on.
I also added the blog you are reading, to pull out the information about making my Six Trousers.

This past week I have added the Seventh Doctor blog as I have been working on a replica of the Hanky that goes around his hat (see left).

Now I am adding the Third Doctor to the portfolio! This is because I am starting working on making the Inverness Cape he is often seen wearing.
I am doing it as part of the college course I am currently on.


So start checking out my other blogs as I slowly add to them.

Posted by Steven Ricks Tailoring at 18:59 No comments: