All I can say is be careful of paying massively over-inflated prices for things that might appear to be better than they are.
Always ready the description closely too. 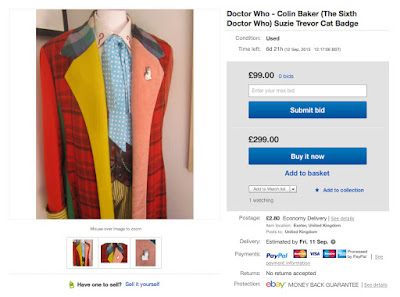 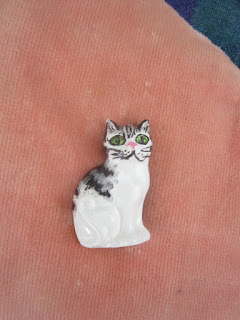 Provenance:
BBC Costume Designer Pat Godfrey purchased four cat badges from a specialist badge shop in Central London for Colin Baker’s costume in 1984. The badges were hand made by Suzie Trevor in clay. This badge was one of four created for me by Suzie from her original moulds and has been displayed on my screen used Colin Baker Costume in a number of exhibitions.
PLEASE NOTE YOU ARE BIDDING FOR THE BADGE AND NOT THE ORIGINAL COSTUME!!!!!

Just a reminder that you can still buy an EQUALLY ORIGINAL cat brooch, hand made by Susan Trevor from the original mould, for £35 inclusive of global shipping. 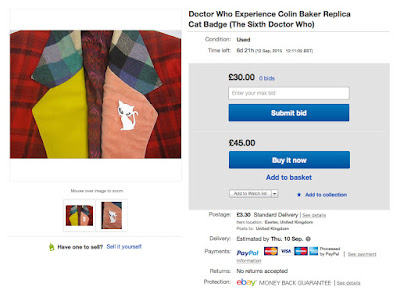 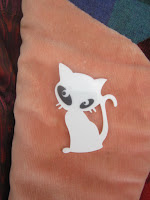 Provenance:
This cat badge is the same as the badge used in the Official BBC Television Exhibition ‘The Doctor Who Experience, Earls Court, London. The costume displayed in the exhibition was not screen used but a replica made by a couple trading under the name ‘Cloth Ears’. A badge of this design was used on the display.
PLEASE NOTE YOU ARE BIDDING FOR THE BADGE AND NOT THE ORIGINAL COSTUME!!!!!

I was browsing around on eBay and found a cheap as chips listing for a white plastic cat brooch which I thought was worth a look. 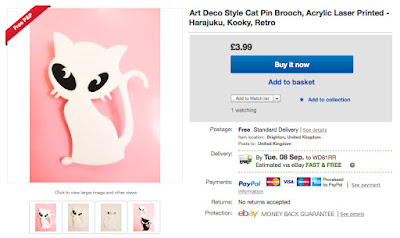 So, after a number of lack-lustre auctions, it finally looks like Bonhams has a genuine challenger to their Entertainment Memorabilia sales.

PropStore.com have been selling high-end props and costumes for sometime now, including the occasional Doctor Who piece.

But this month they are holding a live auction at the BFI IMAX cinema in Waterloo - for all intents and purposes a Bonhams style auction.

there‘s some amazing stuff on offer, from Mr Spock’s costume from classic Star Trek, to costumes from Back To The Future, the Alien and Star Wars films.

And unlike the last couple of years of Bonhams auctions, there are is a good spread of quality items on offer to attract the interest of the dedicated Doctor Who fans out there.


Here are just the lots relating to
the Sixth Doctor

The prop communicator is made of aluminium with bevelled edges and original rubber buttons. Sympathetically restored, the piece features a replacement grill made using production-used mesh and a replacement red Perspex triangular section. One of only two believed to still be in existence, this prop device displays some scratches and wear but remains overall in good condition. Dimensions: 12 cm x 5 cm x 2 cm (4 ¾” x 2” x 1”) 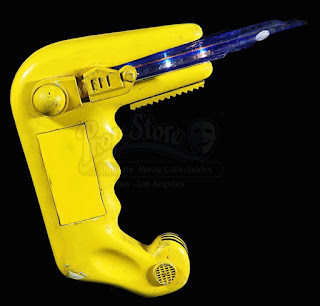 Lot 93
Terror of the Vervoids Light-Up Blaster
A prop light-up blaster from Doctor Who. This blaster and others like it were used by The Doctor (Colin Baker) and the crew of the Hyperion III after the ship was invaded by the plant-like Vervoids.

The prop blaster is made from vac-formed plastic and resin with an acrylic barrel. Lights run up the barrel and are activated by a button on the grip. The blaster is finished in yellow and black paint. A replacement battery cover has been fitted to the weapon’s left side and the piece has some scratches and wear to the paint finish. It remains in otherwise good condition. Dimensions: 19 cm x 16 cm x 6 cm (7 ½” x 6 ½” x 2 ½”)

As this item contains electronic components, every effort has been made to describe them accurately; however no guarantee or warranty is made as to functionality, lifespan or safety of those compo-nents. It is entirely incumbent on the new owner to satisfy themselves as to their safe use and maintenance. 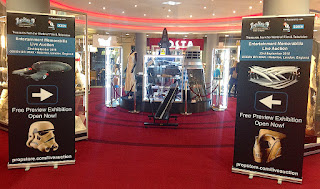 Posted by Steven Ricks Tailoring at 18:23 No comments: