I see Sil’s ticker tape machine has spewed out another section of tape.
Back it on eBay! 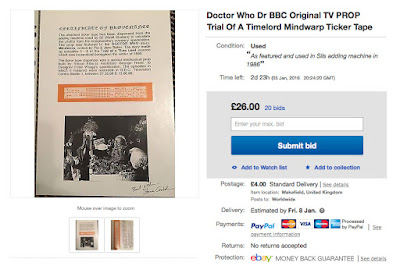 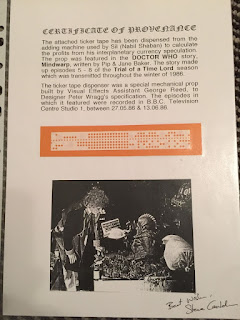 - This auction is for a genuine cutting of ticker tape taken from the adding machine used by Sil in the BBC Dr Who - Trial of a Timelord Season - Story "Mindwarp".
- This prop featured in the Mindwarp episodes recorded in BBC TV Centre between 27.05.86 and 13.06.86
- The ticker tape dispenser was made by George Read to the design specification drawn up by Peter Wragg.
- Ticker tape is attached to A4 card and signed by Steve Cambden. Bottom right of card. 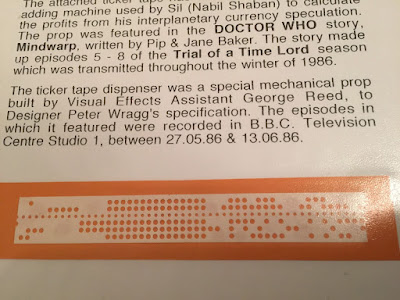 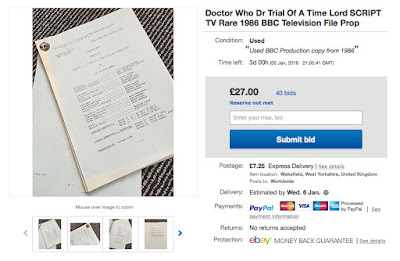 Trial Of A Time Lord - Script 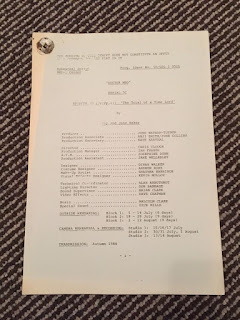 - 61 page BBC Dr Who Rehearsal Copy Script from 1986.
- The Trial Of A Time Lord Episode 10.
- This BBC 1986 production file copy was held in the official BBC Production Office filing cabinets.
- Interesting item as shows episode timings on the top right of each page likely from a prep and rehearsals pre transmission in 1986.
- This BBC filing script also comes with a letter confirming its authenticity from the previous owner who knew John Nathan-Turner. 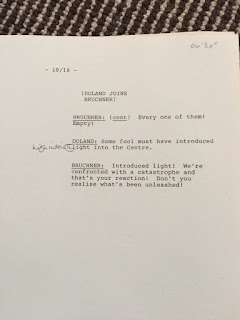 - The script is in good condition for its age.
- The script clip has some rusting due to the nature of its age. All pages are A4 green.
- I will only send this via tracked and signed delivery due to its rare nature and value.
- Please send any questions and I will send a response in 24 hours. Thanks.
Posted by Steven Ricks Tailoring at 20:37 No comments:

As 2015 draws to a close, it’s time for the end of year Entertainment Memorabilia sale at Bonhams.

Here’s the Doctor Who items on offer.

FOOTNOTES
The vendor acted on Doctor Who for many years in different roles, including as a yeti in the Web of Fear and was given this prop after filming had ended.