Over on the dw_cosplay forum, one of my readers has posted a very interesting and well researched investigation into the custom worn for the Doctor Who stage play, The Ultimate Adventure.
With permission, a shortened version is reproduced below, but you can read the full version here:
Six breakdown - Doctor Who:
The Ultimate Adventure variant 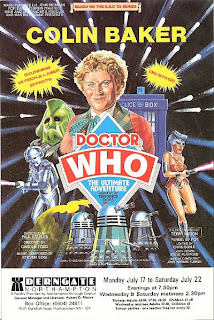 One costume which remains equal parts iconic and obscure is the redesigned stage version of the Sixth Doctor's costume, made for Colin Baker's run in the 1989 stage play Doctor Who: The Ultimate Adventure.

BACKGROUND
Various behind-the-scenes reasons have been given for the redesign of this costume from its original TV version. Some sources have suggested reasons of technical suitability for the stage; increased heat from stage-lighting as opposed to a television studio, and the physical action required by the Doctor in a stage production without stunt doubles, meant a more breatheable and freely-moving wardrobe would be required. Other sources, including Colin Baker’s website, indicate that Colin himself suggested the aesthetic changes simply because he had never been overly fond of the original, and finally had his chance to improve upon the design. Whatever the reasons, various changes were made to the costume on multiple levels. New fabrics were used, notably incorporating purples and blues which would not have been usable on television due to the CSO (blue-screen) effects. Existing patterns were modified, some wardrobe pieces were replaced with entirely different ones, and other tweaks and additions were made. 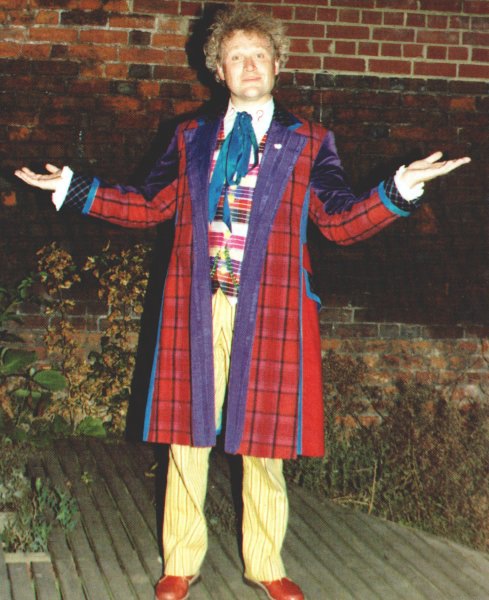 The main problem for costume enthusiasts like us where this costume is concerned is that there seems to be almost no substantial evidence of it in circulation anymore.