Exactly 24 years ago TODAY there was an unusual auction at Bonhams to sell off a vast amount of ex-BBC costume department items.

Due to the volume of items on offer, the sale was held at the BBC Costume Warehouse, which at the time was on the Royal London Industrial Estate in North Acton.

Most of the sale was non-descript items, broken down into sections such as PERIOD COSTUMES - GREEK/ROMAN, MEDIAEVAL, TUDOR, ELIZABETHAN, STUART, GEORGIAN and REGENCY, VICTORIAN and EDWARDIAN etc.

It then moved on to SPORTSWEAR and MISCELLANEOUS before CHILDRENS and LIGHT ENTERTAINMENT. There was even a section for FANCY DRESS and ARMOUR, CHAINMAIL ETC.

Then things got more interesting with NARNIA prior to the big draw the sale - the SCIENCE FICTION section.

This was broken down into DR WHO, BLAKE’S 7, THE FLIP SIDE OF DOMINICK HYDE, STAR COPS, and OTHER SCIENCE FICTION COSTUMES.

The sale closed with a section of late additions, which included an extra Doctor Who lot.

I recently picked up a copy of the sales catalogue on aBay - such as it is. Back in 1992 this consisted of a pocket folder with a stapled loose sheet listing of the items for sale. There are no photographs or illustrations, and the descriptions are scant to say the least.

I have transcribed all the Doctor Who items.

Lot 303 Revelation of the Daleks, 1985, Colin Baker as Dr Who.
Guards helmets from Tranquil Repose on Planet Neiros and medical attendants uniform (8)
Sold for £170 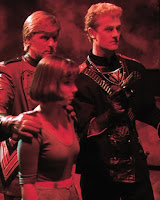 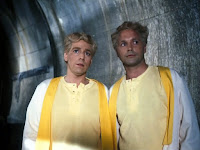 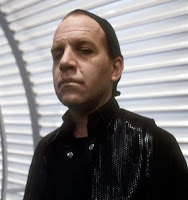 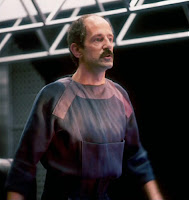 Lot 310 Terror of the Vervoids, 1986, Colin Baker as Dr Who.
Spacesuits, white with silver and grey detailing, 4 with padded shoulders (6)
Sold for £150
Posted by Steven Ricks Tailoring at 11:00