These boots exchanged hand on eBay back in April 2013 when I think they sold for £590.

Here they are again, for slightly less. 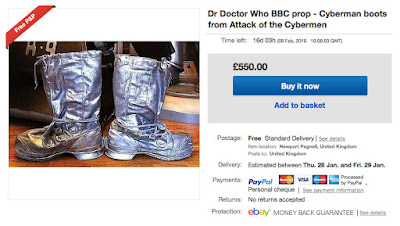 Attack of the Cybermen
Cybermen boots 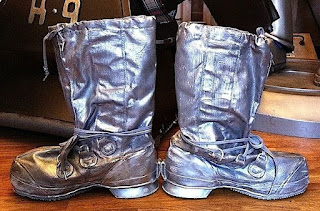 This is a rare original prop from the classic series of Doctor Who - a pair of boots from a Cyberman costume.

One boot has 'J Ainley' (nephew of Anthony Ainley') written on the top. He played a Cyberman in the 1985 sixth doctor adventure Attack of the Cybermen, and so the boots can certainly be dated to this story and may have featured in The Five Doctors as the BBC tended re-use costumes.

Classic series props are few and far between, especially ones relating to the iconic monsters of the show.
Posted by Steven Ricks Tailoring at 13:28