This coming week there is another auction at Bonhams in Knightsbridge of Film and Entertainment memorabilia.
Amongst the James Bond and Beatles items (and Laurence Oliver’s costume from Richard III) are a number of original Doctor Who costumes.

There is small batch of further items form the Angels costumes archives, containing a couple of Doctor Who lots.

The, after a number of film posters and other memorabilia, there are six more Doctor Who lots, though this time not directly from Angels.
Star items amongst them is a full Tetrap costume from Time and The Rani.
Also on sale is a set of rehearsal scripts form Robots Of Death, which went unsold at the Bonham’s Auction on 16th June 2009, so anther chance to grab them if you meant to bid last time around.

The viewing is Sunday 13th and Monday 14th June, so I went on Monday and took some more detailed pictures, particularly of the Tetrap costumes.

In the meantime, below is a full list of the items on offer, taken from the online catalogue so they can be seen all together and long after the listing on Bonhams will have been removed. 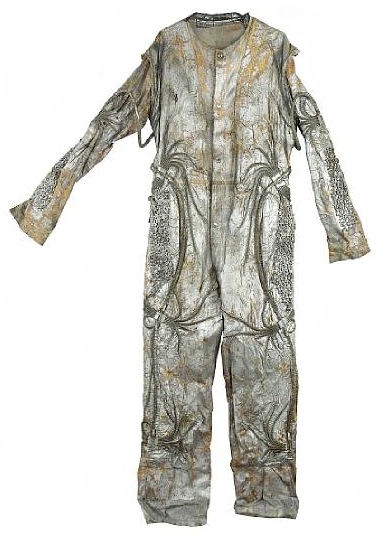 Footnote:
This was worn by Ken Barker in the January 1985 story, 'Attack Of The Cybermen', with Colin Baker as The Doctor. Barker is also credited as the Mutant in 'Revelation Of The Daleks', March 1985.