This is another one of my delayed entires.

I should have posted this at least a week back, but due to my vertigo attack, I was unable to finish writing it.
Here it is at last.

Today was, thankfully, the last day of my whirlwind week of Who happenings.

On Wednesday I had been to the latest Bonhams Auction; Thursday I went to Cardiff on a Location Tour; Friday was a bit of rest bite (though my birthday, so I had earned a bit of rest); Saturday I had taken my French friend on a Tour Of London; and today my friends who own one of the original screen-used Six Frock coats came to visit. 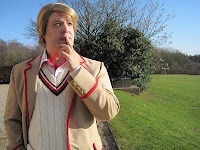 Earlier this year I had acted as a go-between for Bob Mitsch when he came to the UK for the Time Quest event. He had wanted to meet every Doctor, appropriately dressed, and I had made him a Five Coat and Trousers to meet Peter Davison in (see left).

He famously has a superb Tom Baker outfit which suitably foxed the man himself. We had great fun on our London Tour, where he certainly turned heads and raised smiles with those who ‘got it’.

Bob also owns a very good McCoy and McGann costume, but the one he was lacking was a Six . . . .

Luckily for Bob, as well as owning a complete screen-used Six costume (which obviously would not be available for loan!) my friends also have a version made by cosplay tailors Cloth Ears, and it was this that Bob wanted to borrow.
Prior to the event in February it had been dropped off to me (the same day I got to try on the real deal), and I took it to the event for Bob to wear (see below). 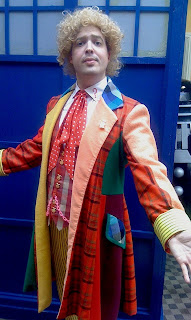 Bob had a great time wearing the costume, and got some great photos of himself with Colin Baker, who was suitably impressed.

After the event I took the costume home, and I had been carefully looking after it ever since.

This week, however, it was time for it to be returned to its owner, as someone else was in need of load of it.

The Cloth Ears Six Coat
The Cloth Ears version of the Six costume has become legendary in the past couple of years as they had gone to great lengths to match fabrics and crib a pattern from a screen-used coat.
In some respects this costume is a rival to me, and a challenge to attain to.

I really do not like critiquing the work of others, unless it merits it, and I have nothing but respect for what Cloth Ears produced.

Like my work, it was born out of a passion for the subject matter and their work is exemplary good. However, I was a little disappointed with a number of aspects of the coat where I could see room for improvement.
The first thing that struck me was the shape of the lapels. I always admired their style line with its sweeping curve to the vertical, and the design of how it folds back for the entire height of the coat, rather than rolling.
Sadly I could see neither here as the lapel went in an almost straight line down and the lapel has a distinct tendency to roll like a conventional coat (see below, left). 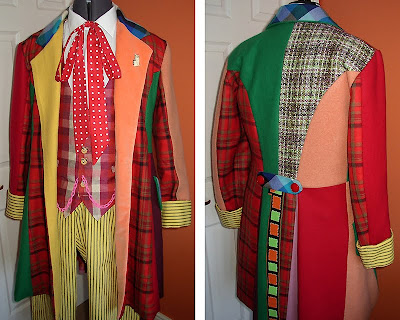 The ‘fiddle-back’ as it is sometimes called was a little off too, with the curved seams just not curved enough in my eyes (see above, right). 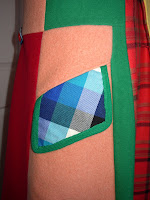 The outer pocket flaps felt way too big and cumbersome (see right), and I gather the cuffs were equally oversized (these had been folded and stitched to a more suitable size by the owner, so they appear right in these photos).

I had also heard of the dedication the makers had taken with matching the fabrics and reweaving a number of them bespoke to match the original.
Though I could see work had been done here, I was at a slight loss to accept them as screen-accurate. 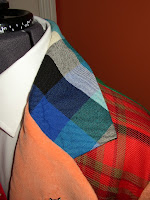 The weave for the red tartan panels and the collar were certainly correct, but the choice of colours used was not quite right (see left).
The collar looks to have been woven with a blue, but through my research I have already found there is no actual blue in the collar – the colour seen is mixed through two other colours crossing each other. More on that in the future . . . .
The tartan is woven with a green, which looking close-up to the real deal I just cannot see.

A pink fabric used on the sleeve and side panel is much too thick and has a surface feel of mohair, with stray fibres. I think it should be a visibly woven wool.

The lining - which if you look at the original is quite stunning – I mean really stunning – and something I can see would be a serious challenge to match, has been done as a screen printed fabric rather than woven design (see right).
The rest of the materials used are pretty close to the real coat, but these are just the plain colours and not that tricky to find with some application. 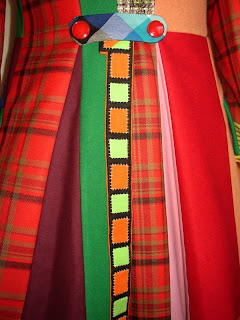 That said, there was a lot of details on the coat that have been matched very well to the screen-used coat.
The back tail panels have been carefully crafted, and some surprising hand stitched patterning has been lovingly recreated (see left).

But all in all I was truly disappointed. I so wanted to love this coat, as I had been toying with the idea of commissioning one myself a couple of years back.
Though undoubtedly THE best replica Six Coat done to date, I could see that it could be bettered something I thought was not possible. 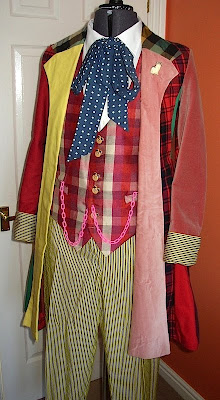 As I have shown, the Six Coat was my first ever serious cosplay project, back in 1984 (see right), so I’ve been there, done that.
It’s something  I treasure and would never part with, but annoyingly it no longer fits me as I was a growing teenager when I made it.

But something is now niggling away at me that maybe I should revisit this coat and have another go, using the skills I now have and the unbelievably unique access I have to the screen used coat.