This weekend, for the first time ever, I went to one of Tenth Planet Events signing events in Barking, East London.

I was drawn to go by the appearance of a Doctor Who celebrity I have always wanted to meet and never had the chance - and no, for once it wasn’t Colin Baker! 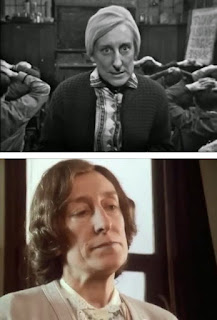 Character actress Janet Henfrey has been on our screens for well over 40 years, and she has taken her portrayal of hard bitten spinster types to incredible heights striking fear into me as a youngster on serval occasions.

She appeared in The Curse Of Fenric as the village busy body, and was known for the part of the housekeeper in As Time Goes By.

But for me it was the domineering school teacher she played in two of playwright Dennis Potter’s tv serials that stand out for me.

It was a role she first played in 1965 for Stand Up Nigel Barton (uttering the title line with ear splintering authority) and again in The Singing Detective in 1986. Remembering she was only 30 years old when she played it first time around, it is a remarkable performance. 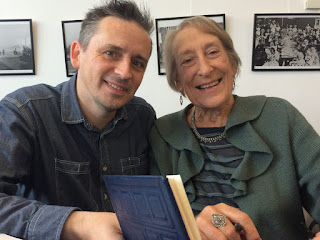 So to walk into the room and see her sitting there waiting to sign autographs was amazing.

She is a particularly welcome addition to my book and I had a wonderful private chat with her while the autograph queues were quiet.

Once over my star-struck moment (and I don’t have them often) I gathered the other signatures I needed then waited for the interview session to kick off.

COLIN BAKER played the sixth incarnation of the Doctor from 1984 to 1986, beginning with the concluding scene of The Caves of Androzani and ending with The Ultimate Foe. 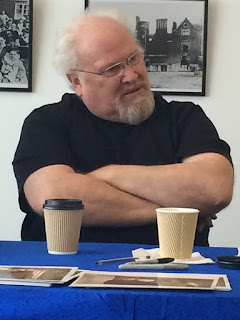 Colin was on good form for the interview session, recounting stories of his work, mainly prior to and after Doctor Who, was was a refreshing change to hear.

STEPHEN MARCUS is a British actor, best known for his role as Nick the Greek in the film Lock, Stock and Two Smoking Barrels. Stephen Marcus played the jailer in the Doctor Who episode The Shakespeare Code. 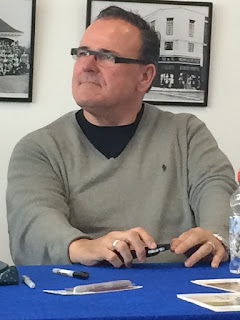 Stephen proved to be the quiet gentleman of the panel, and was such a contrast to the gruff and thuggish characters he plays on screen. He goes to show how a career as a true character actor can be built on looks and perception and not personality.

JEMMA CHURCHILL voiced Lady Forleon in the Big Finish Doctor Who audio story Creatures of Beauty. She has an extensive resumé of work on British television, with roles on Waiting for God, with Graham Crowden; EastEnders; Verity Lambert's Jonathan Creek with Stuart Milligan; The Bill, and Red Dwarf. 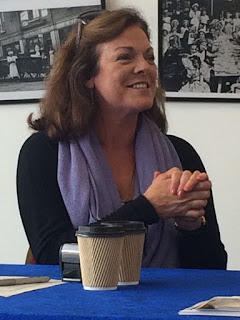 Jemma was enormous fun to listen to and she floored everyone - Colin Baker included - when she revealed she is the daughter of Pauline Yates, an actress well known for her part as Reggie Perrin wife in The Fall And Rise Of Reginald Perrin.

JANET HENFREY played Miss Hardaker in the Doctor Who story The Curse of Fenric. She also voiced Mrs Vanguard in the Big Finish Productions Jago and Litefoot story The Spirit Trap. 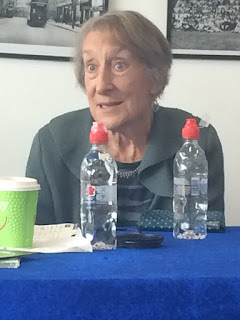 As you have already read, I am a little in awe of Janet.

She wasn’t being asked as many questions as the other guests, so I took the opportunity to ask her publicly about those two roles that as so emblazoned on my memory. It brought back happy times for her and she thanked me afterwards for putting the question, which was so sweet.

CHLOE ANNETT She played Angela Mortimer, the great-niece of Mrs Pumphrey and the love interest of Tristan Farnon, in one episode of All Creatures Great and Small.
In the early 1990s she played the part of Stiffy Byng and Gertrude Winkworth, in Granada's series Jeeves and Wooster, based on the novels of P. G. Wodehouse.

Annett remains best known for taking over the role as Kristine Kochanski in the seventh and eighth series of Red Dwarf, a role which she reprised in the final part of the 2009 special, Red Dwarf: Back to Earth.

MATTHEW DALE is a British actor from Dorchester. He has appeared on a variety of television series including Kitchen Criminals and Stella. His first appearance in the Doctor Who universe was in Mark Gatiss's penned story, Robot of Sherwood. 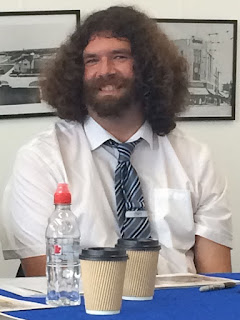 This was pretty much Matthew’s first convention appearance, so he was a bit like a rabbit in headlight. He was very genuine and had the audience slack jawed when he revealed he had just finished a small part on the new Star Wars film!
Aside from the signing session, nothing else important happened today.
Posted by Steven Ricks Tailoring at 18:24