This coming week there is an auction at Bonhams in Knightsbridge of Film and Entertainment memorabilia.

Amongst the James Bond and Beatles items (and Christopher Lee’s original cape from his first Dracula film) are a number of original Doctor Who costumes, some dating right back to the very first season in 1964.
Also on sale are three Doctor costumes; one from Jon Pertwee’s last series; Jon Pertwee’s jacket when he appeared in the Children In Need special, Dimensions In Time; and a near complete Colin Baker outfit (sadly missing the coat).

This is an opportunity I can’t miss, if not to bid, but to at least go along to the viewing and take a closer look, and maybe some decent photos.

Ironically I have just done a replica (to a slightly different pattern) of the Six trousers, so now I will get the chance to check out my work against the real thing close-up. I will take a swatch of the fabric I used and compare it.

The viewing is Sunday 14th and Monday 15th June, so I will go on Monday and take some more detailed pictures, particularly of the Doctor costumes.
In the meantime, below is a full list of the items on offer, taken from the online catalogue so they can be seen all together and long after the listing on Bonhams will have been removed. 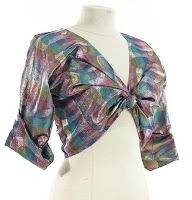 Lot 16
Nicola Bryant as Peri from The Two Doctors series, featuring Colin Baker and Patrick Troughton as The Doctor, first broadcast February - March 1985.
A blouse, having v-neck, and tie to waist, of multi-coloured metallic taffeta, with geometric pattern, with pink cotton lining.
Footnote:
This garment can be seen throughout the series. Nicola Bryant played Peri during 1984 to 1986, her outfits were often revealing, until after much criticism they were toned down for a more conservative look. John Nathan Turner, the famed series producer, later admitted that the character had been added to bring more sex appeal to the show.
Estimate: £450 - 650
Sold for £660 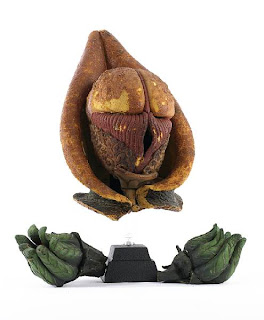 Posted by Steven Ricks Tailoring at 17:38