I am slowly working towards making my trousers for my suit, and gaining experience at each stage.
I have come up with a game plan to get me to the Tennant Trousers I need to make: 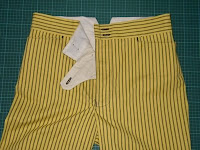 STAGE ONE - done
The Six Trousers were an exercise in following a commercial pattern and so I learnt the basic techniques, having never made any before. The cut was very loose, so quite forgiving if I got it a little wrong. I did a button fly, as I am a dab-hand at buttonholes and didn’t want to get distracted at this stage with learning how to set a zip. 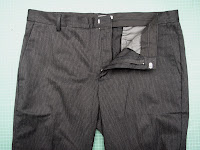 STAGE TWO - done
The GAP Trousers I bought and have deconstructed have given me the definitive pattern I need to work to. I have copied the pattern and studied how they go together, thought I need practice setting a zip fly. 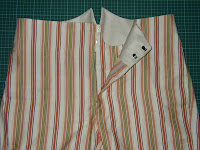 STAGE THREE - current project
The Five Trousers need to follow the same pattern as the Six Trousers, although the legs need to be more tailored, like the GAP straight-cut. I will therefore use the top part of the Six trousers, and blend them into the legs of the GAP pattern. 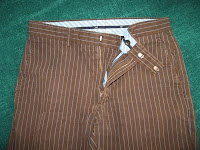 STAGE FOUR - the final goal
Tennant Trousers. Once I have completed all the above I will be skilled and ready to make the real deal, working to the pattern of the GAP straight-cut trousers I bought, using the Jo-Ann fabric.
So, I am now at stage three, having done my Six Trousers and cribbed a pattern from the GAP trousers I recently bought.
Since the Five Trosuers need to be a slimmer fit, I quickly realised that I could use the fronts and back I have cut from the GAP trousers with no adaption as such, and attach the waist band from the Laughing Moon Mercantile pattern to create the result I want. 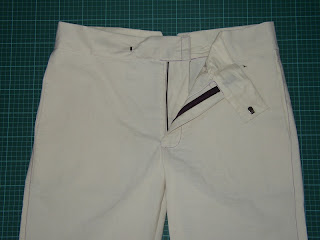 As usual, first up is to make a calico test, which now I have done some trousers, I can make quite quickly (see left).
I used the vertical entry pocket design as the GAP trousers; set my first zip; and used some professional quality hook and bar fastening for the waistband.
I shan’t go into to much detail at this stage about there construction, as seeing it made in calico is a bit dull, besides, after making them I spotted an integral error with the design as a result of me making a rather big assumption!
Although I knew the Five trousers were high waisted with a V-split back (just like the Laughing Moon Trousers) I took it that I could use the pattern as is. However, when I looked at scenes from Planet Of Fire (the only story I know of where he does not wear the cricking jumper) I noticed the V was a lot higher than the pattern. Furthermore I noticed that there was no attached waistband, so the legs of the trousers went all the way to the top of the waist (see below). 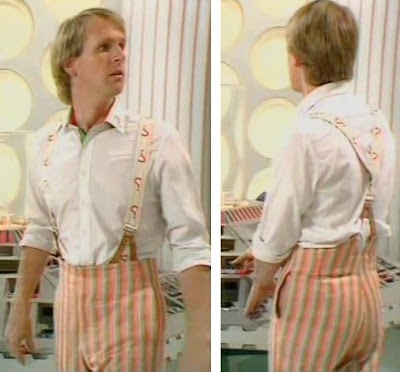 I therefore recut the pattern with the waist band added to the top of the GAP trouser legs, and with the accentuated back V.
Here is a comparison of the different patterns side-by-side with in each case the back on the left and the fronts on the right.
Six Trousers 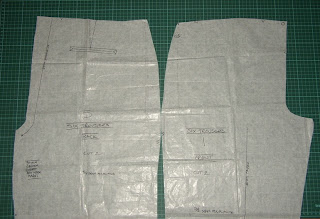 Notice that the crotch on the back is quite shallow and does not hook around like the Ten and Five patterns.
A small V dart above the back pocket gives the seat shape.
The pattern also has an allowance for extra fabric on the seat (beyond the vertical line on the far left on the backs) which gives the option later of letting them out if needed (read: when you get fatter).
Ten Trousers (from GAP Straight Cut) 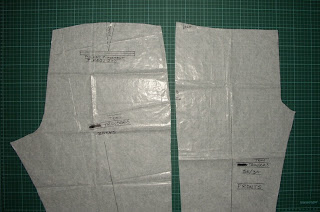 The back crotch is more accentuated and curves back down into the straight leg.
Again, a small V dart above the back pocket give the seat shape.
Being an off the peg size, there is no allowance for letting the seat out at a later stage.
Five Trousers 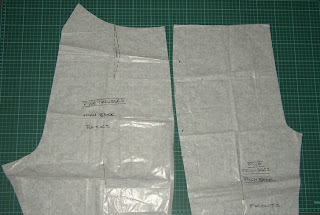 These have the leg and basic shape cribbed from the GAP trousers (look at the shape around and below the crotch point) but I have added the high waistband to the top (notice the distance from crotch to waist top is much greater).
The fitting dart on the back is diamond rather than V-shaped to give a good fit. It is surprising how much influence this tiny piece of shaping has on the final fit.
Just to check all was working as planned, I made up another quick test, this time in the Interior Mall fabric I originally got to make the Six Trousers. Interior Mall had sent the wrong colourway, so I could not use the material, besides the design was really not quite right.
I used this because it is striped and would show up how the fit and shaping was working (see below). All I made up was the fronts and back, with no pockets or fly.

They fitted just right and the high back worked well.
Adding this to the pattern, and forgoing the attached waistband, threw up some unexpected problems, and it dawned on me how important the seam at the bottom of the waistband actually is.
It is to this seam the tops of the pockets are attached and hang from; this seam also secures the top couple of inches of the trousers, making it a stronger area for the braces buttons to be attached, otherwise the insides of the trousers would get pulled inside out; this seam is also where the zip tidily finishes and the buttoning above the zip are located. I was now having to work without the convenience of this. It appears a minor thing, but it has an important knock on effect.
When I studied the trousers closer, I noticed there was a single line of stitch where the lower seam of the waistband would be. This would be my (and had been the costume designer’s) get out option: I could have a single line of top-stitching onto which I could hang and attach all I needed.
With the pattern for the Five trousers finalised, all I have to do is make them up.
Posted by Steven Ricks Tailoring at 22:29