I’ve just got back from an exciting weekend in America for Chicago TARDIS.

The headline guests were from the Peter Davison and New-Who eras, so I’m afraid there was little for the fans of Colin Baker.

Most of the weekend I wore various versions of Matt Smith’s costume, but for the Saturday evening I wore one very special outfit . . . 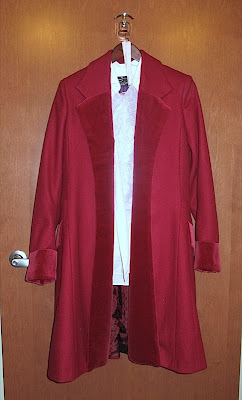 The time was right to premiere my Maroon Six outfit. It is another prototype test piece for my planned screen-accurate Colin Baker coat. To make it into a complete outfit I have borrowed back the trousers from the Purple Six costume I made earlier this year, plus some wedding wear I have.

Around this time I was toying with the idea of entering the Masquerade, a Saturday evening competition for the cosplayers. I’ve never done anything like that before, and I know it can be hotly contested. I then had the dilemma of which costume to wear, since I have so many with me. 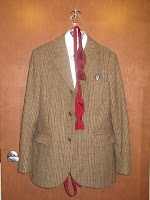 Although my Matt Smith costumes are undoubtedly the best at the event (my trump cards of scene accurate fabrics and authentic items is hard to top) I am more proud of my Maroon Six outfit, as it has been highly tailored and finely made. So I decide this is what I want to enter.

Pre-judging for the Masquarde was at 5pm.

I then went costume spotting to see what other cosplayers were wearing today.

My ticket number was for the autographs 44, so I thought it wouldn’t take too long to get my photo signed and I could then head off for pre-judging, but it still took a full hour before we were called from the comfort of the holding room to get in line.
I quickly changed back into Maroon Six and dashed down to pre-juding to find I had missed nothing: they were running late. 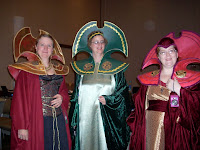 I guess they have done a lot of these events, so the organisation was good, though painfully slow. The MC speaks to us all in turn to check our names, special requirements and to make sure we are all happy.
We then have our photographs taken for their records, before having the opportunity of a brief one-to-one session with the judges where you can explain the USP of your costume. 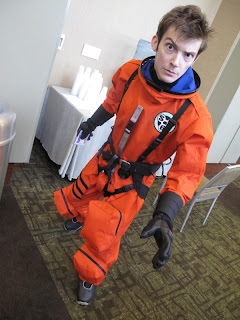 As I took them through my work, I could see their jaws collectively dropping further and further. I think I made a good impression!

Kevin was presenting his Space Suit and we chatted with an Idris while we waited to be moved up to the stage for our moment in the spotlight. 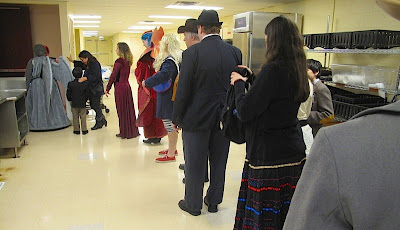 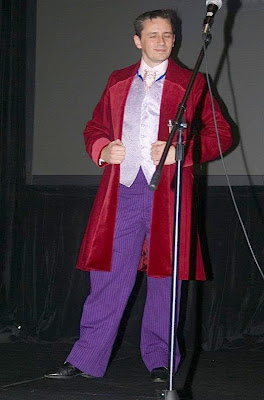 There were forty entries – I was number 18 – so it took a while for us each to have out moment on stage. Some had relatively elaborate set pieces, with accompanying video or music, but I kept mine simple with a walk and pose, while the MC read some explanatory comments I had written.

It was then just a waiting game until the judges announced their results – and they don’t rush!

To keep the audience in their seats (and presumably awake) they play The Match Game (known in the UK as Blankety Blank). This went on for over an hour, giving me time to get a meal on room service before returning to find it wasn’t over! 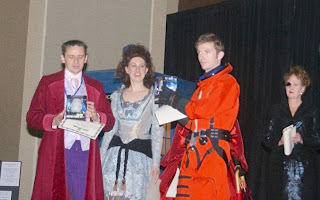 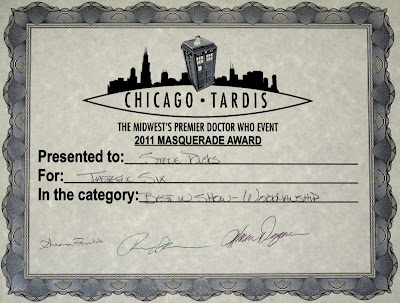 This was absolutely the prize I wanted to get and I was over the moon I had got it.

The end of a great day!
Posted by Steven Ricks Tailoring at 20:46