Close Encounters Of The Sixth Kind

My primary goal is to finish the Ultimate Six Frock Coat in time for Gallifrey One in mid-Februry.

I cannot possibly miss this deadline, so to get the coat ready for Project Motor Mouth in late January is a helpful false deadline to kick me into gear.
With the cold weather and a bought of flu, it was right down to the last couple of days before that I finally got it finished to a level worth showing off - and it goes without saying the ONE person I wanted to show it off to was Colin Baker, who happens to be attending Project Motor Mouth.

It was a shade disappointing to find out that he was not able to arrive until mid afternoon since he had a rehearsal for The Woman In White, a stage production he is starting soon. He therefore missed the Doctor’s photocall and the discussion panel, as well as the main signing sessions in the hall. However, it became clear he had arrived as planned and an additional queue was forming leading out of the room towards where Colin was held up in a side suite.

Word came down the line that only ONE autograph was allowed and NO photos were permitted with Colin. Hum. We’ll see about that. 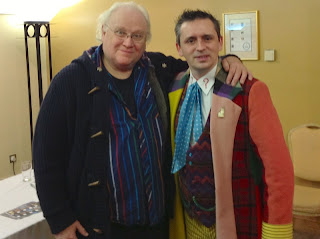 Here’s my picture I got with Colin - read on about how I managed to get it!

It took a while for the queue to snake its way down a corridor past admin offices before we rounded a corner to a small room where Colin was sitting to meet and sign for everyone. 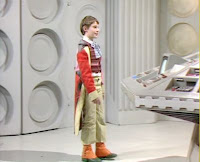 While I was progressing around the edge of the room, Colin suddenly said out loud to everyone, “You know who this is? Gareth Jenkins!” Gareth had been the ‘lucky’ boy who went on Jim’ll Fix It and appear in a mini episode with Colin Baker and Janet Fielding for A Fix With The Sontarans. 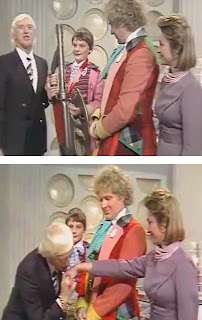 This was the first time ever they had met since. Colin asked what he had been doing with his life and Gareth revealed he is a campaign director for the Save The Children charity.

But the one question on everyone’s lips, and something somehow we shouldn’t ask, is about Jimmy Savile himself and if there was anything inappropriate. It was Gareth who broached the subject first, saying that he hadn’t shown any interest in him - but Janet - that was a different matter. When Jimmy meets them after the mini episode, he greets each in turn and then kisses Janet’s hand, right under Colin’s nose, who visibly winces as it happens. 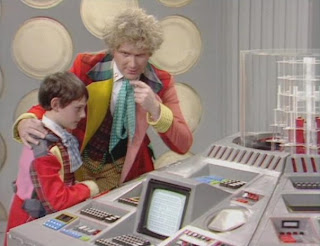 There was always something creepy about Jimmy Savile. We all knew that, but I think we all relied in Auntie Beeb not to put criminals on our screens and facilitate their crimes in the process. 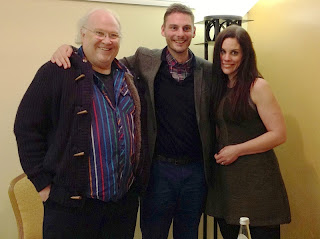 Sadly it’s all in the past now and nothing can be done to put it right for the dozens upon dozens of victims down the years that fell pray to the hand of such a depraved individual.

You can read Colin’s opinion here

Anyway, I finally got to the front of the queue and approached to get my photo signed. Colin looked up and said, “Ah, here we have someone well dressed!” He started to sign, saying, “Is that a Cloth Ears coat?” “No”, I said, “I made it.” He was surprised and as he stated to look t me I could see his eyes tracking around and all over my coat. “I’m a tailor”, I explained.
“We’ll, it’s very good”, he said, “VERY good”.

I reminded him we had met at Nor-Con and he feared he had forgotten me, but I told him about the set of fabric swatches I had passed him, and he remembered.

I opened the coat to show my waistcoat, which he instantly recognised as being the one that no-one had successfully tried before, seeing how I had knitted it to match the original.
I also showed the coat lining and back panel which had been rewoven to match. His jaw dropped and asked how much it had all cost. I said a lot and he wasn’t surprised at all.

I explained how the pattern had been life’s from a screen-worn coat, as well as the colour matching and weave patterns. He knew the coat I referred to, so understood that everything was authentic.

I asked if there was a chance of a photo with him, which he INSISTED I got. He knew he shouldn’t, but nothing was gonna stop him and I apologised to everyone in the queue behind me, none of which had a problem with the hold-up. I think a lot of people were keen to see what Colin thought of my costume, so welcomed the chance to find out.

We posed for a photo and anyone with a camera to hand jumped in to get a shot.

I finished by shaking Colin’s hand and giving him one of my business card. He promised to look me up and I do hope he finds my blog and likes what he see.

If you’re reading Colin - meeting you in the coat made my day - thank you! 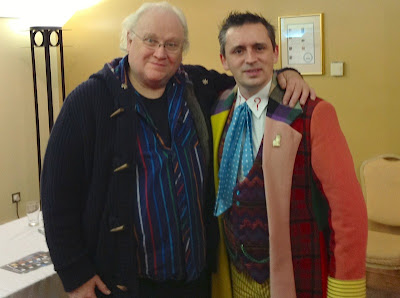 Posted by Steven Ricks Tailoring at 10:23