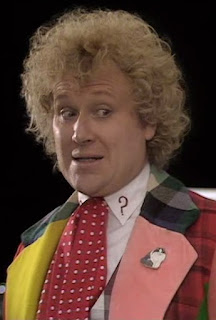 Any casual viewer of the Sixth Doctor will have picked up on his affection for cats, expressed through the various brooches he wore during his time in the TARDIS.

The cat-loving nature of his Doctor was all Colin’s idea - in fact, a couple of the brooches he wore were portraits of Colin’s own cats!

But unless you’re a die-hard Sixth Doctor fan, you might not know about the deeper, hidden secret about his costume. 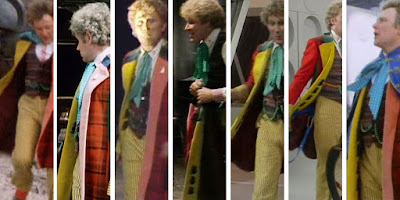 On the inside of the yellow lapel, from time to time, you might get a glimpse of a small black silhouette of a cat, and depending which adventure you are watching, their number varies.

But there is a method behind this seeming random act. Like the notches on the nose of a WWII fighter pilot’s aircraft, Colin added a small felt cut-out of a cat for each adventure he had completed.

The list is as follows, and the images above reflect this.

After the hiatus between season 22 and 23, the idea was dropped and the cats disappeared.

Of the maximum six cats that appear inside the coat, only three are known to have survived - and they had been removed form the coat so suffered some damage in the process.

A few years back I had access to the coat inside which they are now all sewn, and from this I have been able to lovingly recreate them.

I redrew them in Adobe illustrator, restoring much of their shape to how they would have looked freshly sewn into Colin’s costume (one of the cats had lost its tail, so this has been recreated to match the others).

I then took the artwork to a specialist, who laser cut in felt for me!

He cut as many as he could out of the piece of felt I provided, so I have a number of sets available for sale.


If you would like a set of felt cat silhouettes for your Sixth Doctor coat, one set of three cost GB£30. Two sets of three are GB£45.
FREE global shipping is included in the price!

Posted by Steven Ricks Tailoring at 15:30