Ultimate Six Frock Coat - back to the future

Before I start, you’ll have to trust me that this posting leads somewhere, as it’s a bit out of the box, even for my standards!

I can remember one of the things that caught my attention back in 1984 when the Sixth Doctor’s costume was first seen, was the incredible detail and mix of colours – on the back of the coat.

Now, to see the back of the costume of the lead actor was something a little more unusual than you might think. Run with me here. 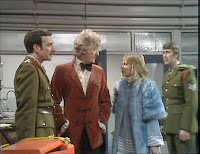 I once heard a tale about Jon Pertwee and about how he was a genuine ‘stage’ actor, who could use some tricks of his trade to maneuver into a better position to make himself look better than his co-stars.

The trick would be to stand every so slightly towards the back of the stage from someone he was playing a scene with. This meant to maintain eye contact with Jon they needed to stand with their back to the audience, conceding the better position.
This is where the phrase Upstaging comes from. 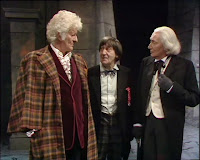 When I was putting together the screen-caps for my Costume Index on the Third Doctor I wanted to check if the Inverness Capes were in single or separate pieces, something that could be confirmed by seeing a back view.
I was surprised to find that Jon rarely (if ever) knowingly turned his back to the camera. When he was in two-shot dialogue scenes he is pretty much always turned just slightly towards camera, forcing his co-star into the lesser position or to stand alongside in a play-for-radio way. The few back views I showed were all those I could find!

Colin Baker’s acting style is completely different. He does not use this ploy and can often be seen shamelessly back to camera.

Below is a montage from his first story, The Twin Dilemma, giving an idea of how many times you actually do get to see the back of his coat (each screen-cap is from a different scene). 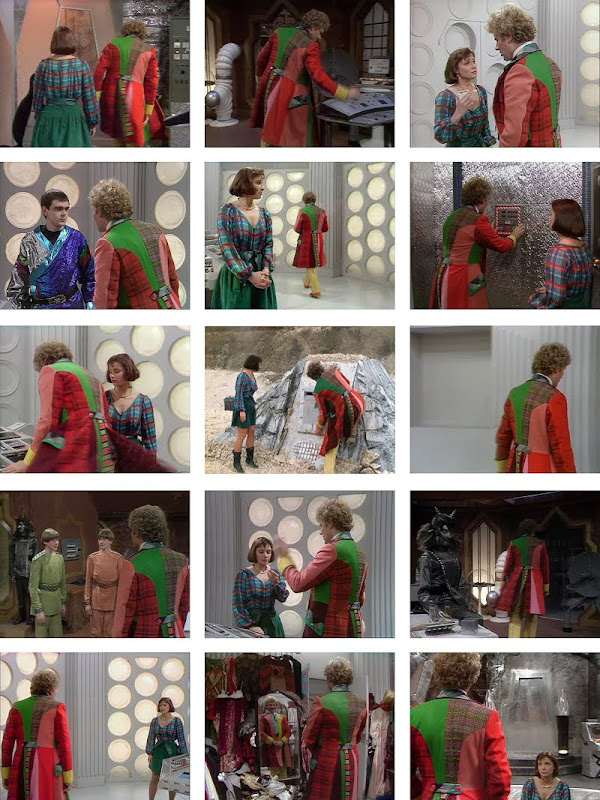 This all means that there are some good chances to see the fantastic work on the back of the coat, and the fabrics used. It was this that such fascinated me.

I’m looking forward to having another go at getting this right.
Posted by Steven Ricks Tailoring at 22:56