Just had a great day out celebrating all thing Sylvester McCoy at the BFI.

You maybe aware that each month the BFI has been screening a Doctor Who adventure - and since this is July, Remembrance Of The Daleks was being screen to represent the Seventh Doctor, with both Sylvester and Sophie in attendance. 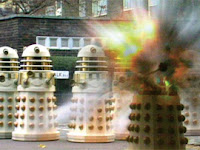 You can read the full story over on my Seventh Doctor Blog, but what you might have missed is I wore my Ultimate Sixth Doctor Frock Coat for a small photoshoot before hand.

Due to unpresidented demand the ticked for the past few screenings have been allocated by a ballot system, and unfortunately I missed out - or so I thought. 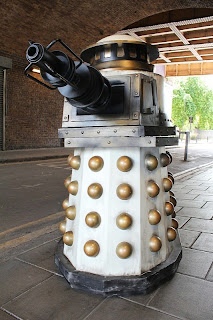 A few weeks ago one of my clients, Tom Nichols, who has a small business hiring out Daleks and TARDISs for event, got in touch to ask if I was going to the BFI screening. It turned out he had offered to display his Special Weapons Dalek in the foyer, and had received the promise of a couple of tickets in return.

He wasn’t familiar with the area, but I thought it an unmissable opportunity to take his Special Weapons Dalek to Windmill Walk, where the Daleks have a pitched battle in episode three of the serial.

The location is barely three streets from the BFI, so Tom jumped at the idea. 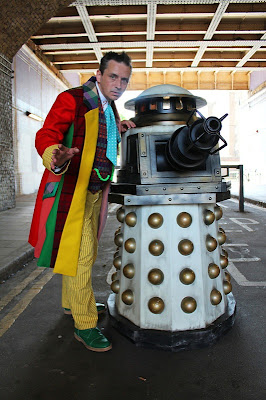 We had some fun getting some great pictures of the Dalek in situe, and a number of slack-jawed passers by also grabbed a few shape too.

It was amazing to see it on the very spot where 25 years earlier it had been trundling along, obliterating Daleks as it went. 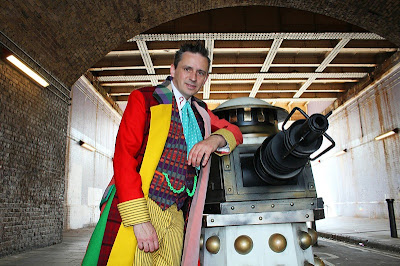 We then drove over to the BFI, where we were welcomed by security and shown where the Dalek was to be set up. 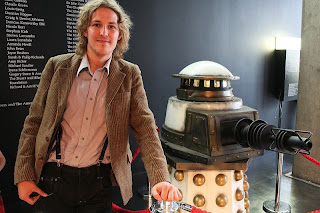 Tom was very easy going about it, and was happy for it to sit there unattended for the duration of the afternoon as a talking point and photo opportunity for everyone passing through. Some ropes were supplied to cordon it of, so all was good.


My full review of the screening can be read 7th Doctor Costume Blog: Perks of the blog - part two

I just want to say a BIG thank you to Tom Nichols for letting me tag along and help him set up the Dalek - and for getting me into a screening I thought I had missed out on!

Posted by Steven Ricks Tailoring at 08:23