I’ve had a little success recently with getting some of the brooches the Sixth Doctor wore, so I thought I’d do a revamped Brooch index, setting the brooches on my Ultimate Six Frock coat.

The first brooch was a china tortoise shell cat, which was introduced in The Twin Dilemma  (see below) and was worn through to Vengeance On Varos.
I was lucky enough to get myself an exact copy in 1985, when the artist who created it did a very limited run of replicas (see left).

Serials appeared in: The Twin Dilemma, Attack Of The Cybermen, Vengence On Varos 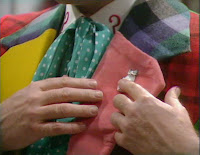 You can get a replica of this brooch made by the ORIGINAL maker! Ordering details an be found here: Ultimate Six Frock Coat - purrrrrrfection!

Midway through season 22 a new brooch appeared on The Doctor’s lapel.

This was a flat plastic silhouette of a black cat with an arched back.
The eyes have fake gemstones.

Serials appeared in: The Mark Of The Rani, Timelash 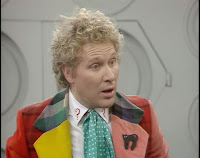 In between The Mark Of The Rani and Timelash, The Doctor wears a sweet little one-off brooch for The Two Doctors.
It is a flat cut-out of a white cat with a contented looking face. 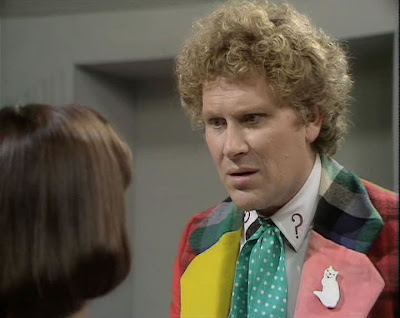 Serials appeared in: The Two Doctors

To round off season 22, The Doctor wears the most unexpected brooch of all - an enamel pin-badge of the cartoon cat Marie from the Disney animated feature The Aristocats.

These are very rare, but it is still possible to track them down through persistent searching on eBay.
Various versions are around with extra decoration around the character, but what you are looking for is Marie on her own. 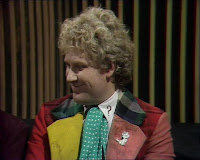 Serials appeared in: Revelation Of The Daleks

Following the 18-month hiatus, he returned with some new brooches, a couple of which have an interesting background story.
They were designed and created by Maggie Howard, and they were known as Maggie’s Moggies.
The brooches were based directly on two of Colin Baker’s own cats: Eric and Weeble!

The first to appear is Weeble (see right) which is worn for the trial scenes throughout The Trial of a Time Lord season, paired with the red cravat.
It is then worn throughout Mindwarp, the end of which leads into the opening of the trial, keeping continuity with those scenes.

Serials appeared in: The Trial Of A Time Lord (trial scenes only), Mindwarp (all scenes), The Ultimate Foe (all scenes)

This was worn paired with the turquoise cravat during the flashback scenes of The Mysterious Planet to help distinguish the two time-lines.

Serials appeared in: The Mysterious Planet

The flashback scenes that form Terror Of The Vervoids saw one final brooch adorn The Doctor’s frock coat.
This a comic-styled ginger cat with a tiger-striped back and tail. The brooch is exclusively paired with the YSL yellow-starred cravat. 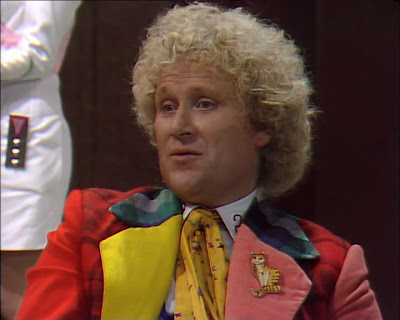 Serials appeared in: Terror Of The Vervoids